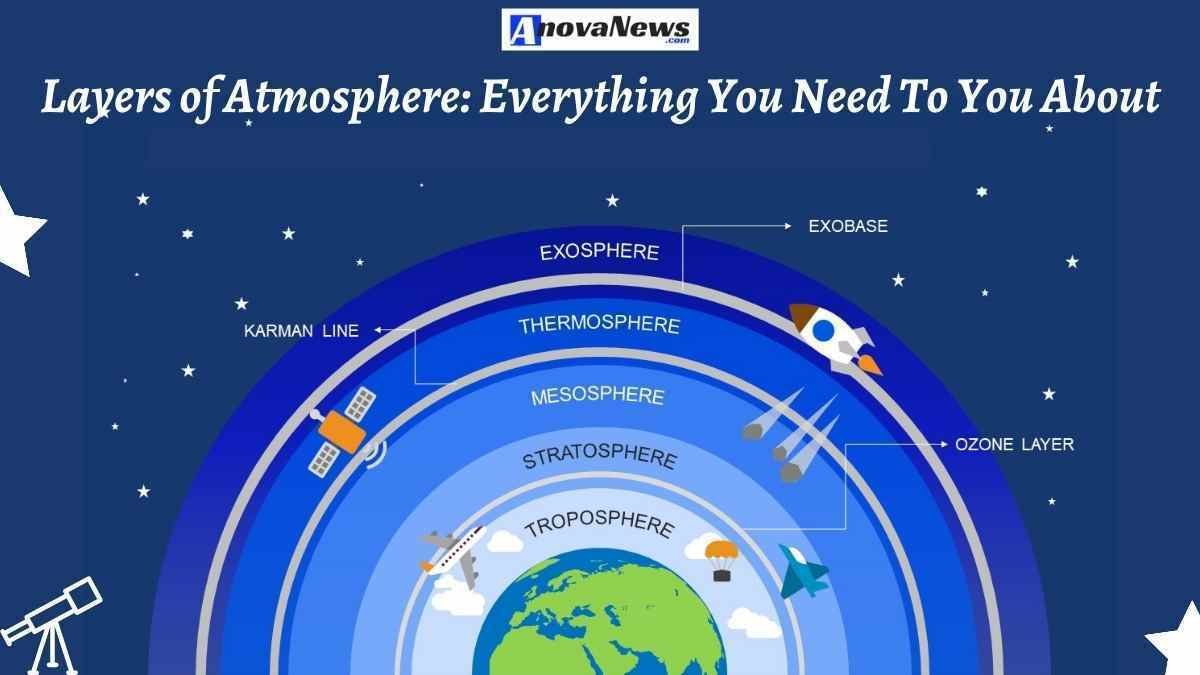 Layers of atmosphere:  The Earth’s atmosphere is broken down into the following layers and several secondary levels. The primary layers are, from lower atmospheric layer to upper: the troposphere, stratosphere, mesosphere, thermosphere, and exosphere.

The Earth’s atmosphere is divided into layers, each with its characteristics. This blog will study all these layers, starting with the basics to advance. We will include all the basic necessary questions that you need to know about layers of atmosphere for example

a) How many layers of the atmosphere are there

b) Layers of atmosphere in order

Let’s start with the layers of atmosphere in order. Then we will cover all the layers according to their order.

The troposphere is our atmosphere’s lowest layer. It rises to nearly 10 kilometres (6.2 miles, or 33,000 feet) above sea level, starting at ground level. The troposphere is where humans live, where practically all weather occurs.

Because the troposphere contains 99 per cent of the water vapour in the atmosphere, most clouds form here.

Despite its shallowness, this layer is responsible for storing all of the air plants and animals require for photosynthesis and breathing. It also comprises nearly all water vapour and aerosol particles (approximately 99%).

Except for cumulonimbus thunder clouds, whose tops can ascend into the lowest sections of the surrounding stratosphere, most of Earth’s weather occurs here, and practically all clouds formed by weather can be found here.

The majority of aviation takes place here and in the transition zone between the troposphere and the stratosphere.

The second layer is known as the stratosphere (layers of atmosphere). The stratosphere exists from the top of the troposphere to roughly 50 km (31 miles) above the ground.

Within the stratosphere, the iconic ozone layer can be found. The high-intensity ultraviolet (UV) light from the sun is absorbed by ozone molecules in this layer, which converts the UV energy into heat.

The stratosphere, unlike the troposphere, grows warmer as you climb higher! The lack of turbulence and updrafts in the stratosphere is due to the pattern of rising temperatures with altitude.

Commercial passenger aircraft travel in the lower stratosphere because it is less turbulent and therefore provides a more comfortable flight. The jet stream moves at the troposphere and stratosphere’s boundaries.

This one is the third layer of the atmosphere. The mesosphere, located between 50 and 80 kilometres (31 and 50 miles) above the Earth’s surface, becomes colder as height increases.

In fact, with an average temperature of minus 85 degrees Celsius, the top of this layer is the coldest spot in the Earth’s system (minus 120 degrees Fahrenheit).

The extremely rare water vapour at the top of the mesosphere generates noctilucent clouds. The tallest clouds in the Earth’s atmosphere can be seen with the naked eye under specific conditions and during particular times of the day.

The majority of meteors burn up in this layer of the atmosphere. The mesosphere can be reached by sounding rockets and rocket-powered aircraft.

This is the fourth layer of the atmosphere. The thermosphere is located between 80 and 700 kilometres (50 and 440 miles) above the Earth’s surface. It contains the ionosphere at its lowest point.

Because of the very low density of molecules in this layer, temperatures rise with altitude. It is cloud-free and devoid of water vapour.

The aurora borealis and aurora australis can be observed here. In the thermosphere, the International Space Station orbits.

The thermosphere’s temperature and the number of ions and electrons present fluctuate from night to day and season to season.

The Northern and Southern Lights are auroras that occur in the thermosphere.

The exosphere has no distinct upper boundary where it finally drifts away into space.

The latter estimate corresponds to a distance of roughly halfway to the moon!

Unlike the other layers discussed above, the ionosphere is not a discrete layer.

On the other hand, the ionosphere is a collection of places in the mesosphere and thermosphere where high-energy solar radiation has ripped electrons from their parent atoms and molecules.

Ions are electrically charged atoms and molecules that develop in this way, giving the ionosphere its name and endowing it with some unique characteristics.

What is the Magnetosphere?

The Earth acts as a massive magnet. The Van Allen “radiation” belts capture electrons (negative charge) and protons (positive charge), concentrating them in two bands about 3,000 and 16,000 kilometres above the Earth’s surface. The magnetosphere is the outer zone encircling the Earth, where charged particles spiral along magnetic field lines.

Which two layers of the atmosphere are responsible for the majority of solar radiation absorption?

Which two layers of atmosphere are responsible for the majority of solar radiation absorption?

a) Stratosphere
b) Thermosphere

Related Topics:Layers of AtmosphereWhich two layers of the atmosphere are responsible for the majority of solar radiation absorption?
Up Next