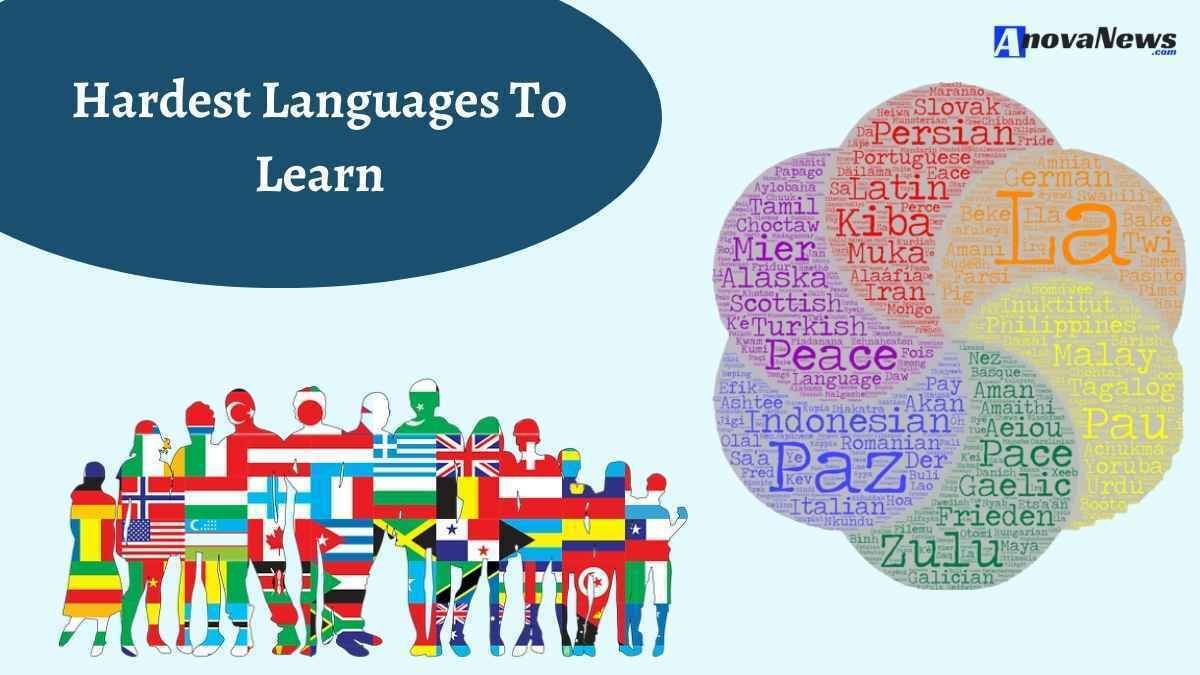 Which one is the world’s Hardest language to learn? Learning a new language is difficult enough, but if the language you choose is already considered complex and difficult, you’re in for a real brain workout! While Mandarin is widely regarded as the Hardest language to learn globally, there are many other competitors on the list that are frequently overlooked! This blog has produced a list of the ten most challenging languages for language enthusiasts who are always looking for new and intriguing languages to learn!

Because Mandarin is not a phonetic language, memorising and writing the words might be the Hardest language to learn. In China, simply looking up Chinese words in a dictionary is considered a skill, which should indicate how difficult the language is!

Mandarin, like Thai and Vietnamese, is a tonal language. It has four tones, and the intonation employed can affect the meaning of a word. Depending on whose pitch you choose, the word “ma” could mean “mother” or “horse.” Chinese writing is also incredibly complicated, with tens of thousands of unique characters representing ideas, concepts, and objects.

As lovely as Arabic is, nearly every aspect of it is likely to be the hardest language to learn for English speakers, from the Arabic alphabet, which is read from right to left, to the complex syntax, to the pronunciation, which includes many sounds that English lacks.

Nonetheless, studying Arabic will provide you with a deeper understanding of the rich and diverse Arab culture, as well as a plethora of new employment prospects, not to mention the sense of personal satisfaction and achievement that comes with mastering one of the world’s most challenging languages.

Russian, which ranks third on our list of the most difficult languages to learn or the Hardest language to learn, employs a Cyrillic alphabet with recognisable and foreign letters. However, speakers should be aware that while certain Cyrillic characters resemble Latin letters, they are different. For example, the letter “B” in the Cyrillic alphabet has a “V” sound.

Russian isn’t quite as challenging as Polish grammar, but it’s close. There are seven cases in Polish and six in Russian. Russians omit the verb “to be” in the present tense, which throws learners into a loop when attempting to compose fundamental phrases. “I am a student” would be translated as “I student” in Russian. Russian, like Polish, has several consonants packed together, making spelling and pronunciation difficult.

Despite its Hardest language to learn, learning Russian might be worthwhile. It’s a highly political and culturally relevant language that can lead to various job and leisure options.

Telugu, one of India’s most prominent Dravidian languages, is spoken in Andhra Pradesh and Telangana and is one of the country’s 22 scheduled languages. Telugu dubbed the “Italian of the East,” is a lyrical language that can be the Hardest language to learn to comprehend for non-natives who do not speak Sanskrit or other major Southern Indian languages.

Non-natives find the language challenging due to several variables, including the script’s difficulty in becoming accustomed to and the language’s difficult pronunciation. Watching movies and listening to Telugu songs are enjoyable ways to learn the language.

In nations like the Czech Republic, Hungary, Ukraine, and Lithuania, the most common language in the European Union is recognized as a minority language. Polish is one of the most difficult languages to learn. For English speakers, Polish vocabulary might be complex and the Hardest language to learn and pronounce.

Despite the Latin characters, the language features additional letters, a complex freestyle system, and consonants. Mastering this language can lead to various opportunities, including travel and study in Poland!

Japanese is another Hardest language to learn for those who grew up learning English, Spanish, or French, but it may be simple for those fluent in East Asian languages. Japanese is a singular language native to the Japanese people, who take great pride in their language and go to great measures to promote it! Due to its sentence structure, thousands of kanji characters, and dozens of dialects.

Turkish is a widely spoken language with a long and illustrious history and culture. It’s native to Turkey, but it’s also found in Cyprus, Bulgaria, and Greece. Because of its pronunciation, grammar, and listening aspects, this language is the Hardest language to learn and is time-consuming for non-native English speakers. There are some advantages, such as using Latin alphabets and the fact that it is a phonetic language.

Since we’re on the subject of difficult grammar, we can’t leave out Hungarian, the torment of English speakers. When learning this one, be prepared to think in new ways. It has 26 cases and suffixes that determine possession and tense rather than word order.

Studying Hungarian in isolation will be twice as difficult as learning Japanese because cultural overtones are crucial to understanding what native speakers mean.

The finish is a sound close to English but a complexity comparable to Hungarian. Don’t even get me started on traditional or classical Finnish or how modern Finns communicate. Let’s pretend these two are opposites and call it a day. And the grammar is also difficult. Learning Finland’s national language will not be easy, but it will be extremely rewarding!

Korean, the most spoken language on the planet, is also at the top of our list of the hardest language to learn. More than 75 million people speak Korean, with 72 million living in South Korea and the rest in North Korea, thanks to two separate writing systems (Hangul and Hanja). What’s fascinating about Korean is that there’s no general agreement on how it relates to other languages.

The possible connections are with Japanese and the languages of the Altaic group (Mongolian, Turkic, and Tungus). Getting engaged in hit series like “Squid Game” is one of the best ways to learn Korean. In no time, you’ll be able to count the days of the week in Korean.

Thai is Thailand’s national language, and it is spoken by about 60 million people, mostly in Thailand. Because English is not frequently spoken or understood in Thailand, it is a useful language to learn if you plan to work, study, or travel there for an extended period.

However, Thai, like Vietnamese and Chinese, is a tonal language, so it is the Hardest language to learn for English speakers to master. This means that students must recognize the pitch of a tone to comprehend what is being spoken. There are five tones in the Thai language, some of which are not found in English. Thai has its script, consisting of 44 consonants, 18 vowels, and six diphthongs, all of which must be memorised.

Farsi, or Persian Farsi, is an Indo European language spoken as a native language by around 70 million people, primarily in Iran, Afghanistan, Uzbekistan, and Tajikistan.

Although it’s a complex language for English speakers to learn, several English words originate from Farsi, including “soup,” “pyjama,” and “checkmate.” One of the more challenging aspects of the Farsi language is that it uses an Arabic script, which looks completely different to the Latin alphabet and is also read from right to left.

Although it can take time to master, Farsi is a very poetic language in which many of the words have deep meanings or dual meanings, and learning it will connect you to a rich and diverse culture. So it is considered the Hardest language to learn and pronounce.

The basic line is that various criteria determine the most difficult languages for English speakers, not just one. The number of speakers, the language’s origins, its resemblance to English, and other factors contribute to how difficult it will be to learn.

What matters is that it isn’t the “most difficult language to learn.” It all comes down to how enthusiastic you are about learning, how you’ll cope with psychological worries, and who you’ll turn to for assistance, just like learning any other language.

Every language has its own set of difficulties, but it also has rewards, joys, and fulfilment. Whatever language you choose to learn, keep in mind that your time will be well spent. That was all about our article Hardest language to learn.