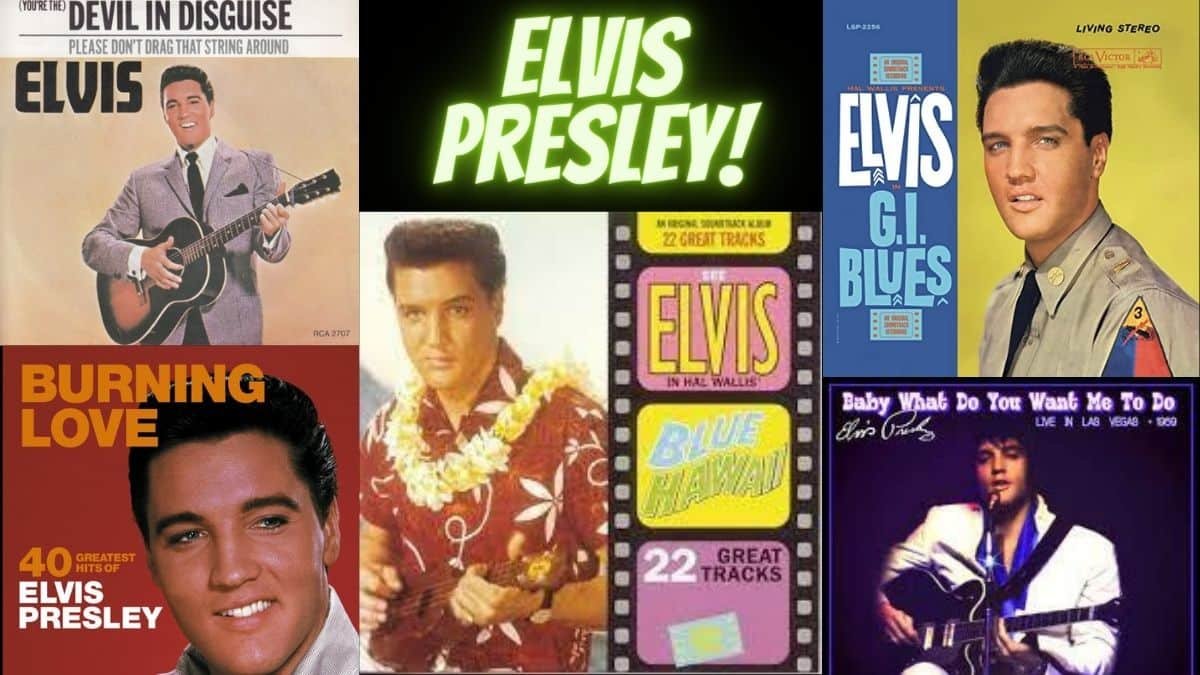 Elvis Presley was an American musician and actor who lived from January 8, 1935, to August 16, 1977. He is known as the “King of Rock and Roll” and is considered one of the most important cultural symbols of the twentieth century.

His energising interpretations of songs and sexually provocative performance style, along with a uniquely potent blend of inspirations spanning colour lines during a pivotal period in racial relations, led to both immense success and initial controversy.

In this article, we are going to discuss all his life and various list of songs he sings. Elvis Presley is known for his best performance so let’s start with his childhood first.

Elvis Presley, also known as Elvis Aaron Presley or Elvis Aron Presley, was a famous American singer, widely known as the “King of Rock and Roll” and one of rock music’s dominant performers from the mid-1950s until his death. He was born on January 8, 1935, in Tupelo, Mississippi, and died in Memphis, Tennessee, on August 16, 1977.

Presley grew up underprivileged in Tupelo, relocated to Memphis as a youngster, and was just a few weeks off welfare with his family when producer Sam Phillips of Sun Records, a local blues company, called him after hearing his audition tape.

Presley had heard some of this music on the radio, some at his parents’ Pentecostal church, some at the Rev. H.W. Brewster’s Black Memphis church, and some at the Beale Street blues clubs, which he began frequenting as a teenager.

With his long, greased-back hair and eccentric outfit combinations, Presley was already a fascinating personality.

Even so, it wasn’t until July 1954, when he and the band began performing blues artist Arthur (Big Boy) Crudup’s song (That’s All Right Mama), that his complete musical personality emerged.

They arrived at a stunning combination, later named “rockabilly,” which retained many of the blues inflexions of the original. The basic beat hits a more relaxed track, and Presley’s high tenor vocal adds a lighter touch.

Over the next year, Elvis Presley released five singles on Sun, all of which had this sound. None of them, however, became a nationwide smash. By August 1955, he’d released his fifth album, “Mystery Train,” which is likely his best work to date.

He had amassed a sizable Southern following for his albums, live appearances at regional roadhouses and clubs, and radio performances on the nationally televised Louisiana Hayride. (The addition of drummer D.J. Fontana, first for the Hayride events and on records beginning with “Mystery Train,” was a significant musical development.)

Parker arranged for Presley’s song catalogue and recording contract to be sold to Hill & Range and RCA Victor, both situated in New York City.

He began recording at RCA Studios in Nashville, Tennessee, with a smaller group of musicians.

He entirely ruled the best-seller lists from 1956 to 1958, showing in rock and roll and opening doors for white and black rock performers. His television appearances broke attendance records, particularly those on Ed Sullivan’s Sunday night variety show. Except for a few minor vehicles, even his films were big office smashes.

Presley became the decade’s teen darling, greeted by thousands of shouting young women everywhere he went. In early 1958, when it was reported that he had been conscripted and would join the US Army, there was that rarest of pop culture events: a genuine moment of mourning.

More importantly, he was a primary cultural driver during his time. Elvis conveyed a blend of humility and confidence, strong commitment and comedic doubt in his ability to elicit a frenzy.

He influenced thousands of musicians,  starting with Jerry Lee Lewis, Carl Perkins, and others who were more or less like-minded Southerners. Who was the first generation of rockabillies and the following generations with many musical and cultural inspirations and ambitions?

It was impossible to imagine a rock star of any significance who did not owe an express debt to Presley, from John Lennon to Bruce Springsteen, Bob Dylan to Prince.

Even more than that, Presley enthralled his audience. You didn’t have to want to be a rock star or even a musician to want to be like Elvis, which meant being free and creative but remaining grounded in reality.

Perhaps an entire generation or two, millions of people have defined their sense of personal style and aspiration in words that Elvis popularized. Springsteen stated at the time of Presley’s death, “It was like he whispered his dream in all our ears, and then we dreamed it.”

Some Facts About Elvis Presley

Some think that Elvis was linked to the mafia

One of the most popular explanations for why Presley faked his death is that he had no choice but to do so in order to avoid the mafia. In an interview with TIME, Gail Brewer-Giorgio, author of the bestselling book Is Elvis Alive, described how she combed through hundreds of FBI papers to come to the conclusion that Presley was an American hero who had to go into witness protection.

What was Elvis Presley’s last words?

“I’m going to read in the bathroom.” That was the last thing Elvis Presley said to his fiancee, Ginger Alden, at his Memphis house, Graceland, on August 16, 1977.

Elvis Presley:  When and how he die?

Presley was discovered unconscious on a bathroom floor. He was with his 21-year-old lover, Ginger Alden, on Aug. 16, 1977, in his Graceland house at the age of 42.

What was Elvis Presley’s most successful song?

“Hound Dog,” which was controversial at the time, is today widely regarded as one of the most influential songs in the rock ‘n’ roll genre. It was also Presley’s best-selling single, spending a record-breaking 11 weeks at number one in 1956 — a record that remained for 36 years.

Some of Elvis Presley’s Songs

The performer started a musical revolution by modernizing traditional blues, country, and bluegrass for contemporary (and more youthful) audiences. Throw in a charismatic stage presence with then-scandalous hip swings and body contortions, and it’s easy to see why Presley set the charts (and hearts) ablaze. Elvis Presley… 🙂

A Traveller’s Guide to India – 5 Physical Features of India