Cause of Memory Leak in Python And How to Fix Them 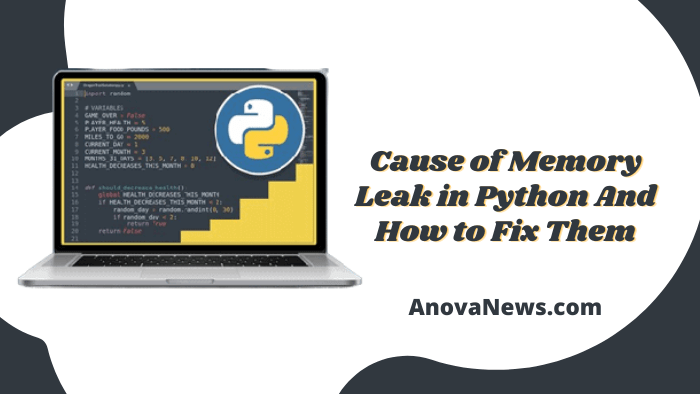 Cause of Memory Leak in Python is the key part of every program as it preserves the program’s efficient working. e Similarly, python’s memory storage is necessary, but it turns out to be out of space error due to memory leaks. It happens when the garbage collector fails to clean and delete the unreferenced or unused data from the python.

Memory leak in computer science is that when objects in a program’s memory are stored but are not in use, they have not been moved to remove unused objects. Hence, it contributes to the unused objects compilation in the memory.

Memory is also available in the Python language. This is when the python memory is filled with unused items that haven’t been removed. It’s when unused things leak into the used memory such that they can’t be removed. These are called python memory leaks.

Python memory management is an application to solve the python memory leaks problem when the data is read and written. It works to remove unused data from memory by unused data clearance from the memory to ensure memory efficiency.

In other words, Python developers and programmers generally do not have to worry about the memory allocation & deallocation in python programmers because CPython can work on that automatically by informing the garbage collector to clear from memory the unreferenced data garbage.

But it’s not as simple as it seems when we talk in practical words. Garbage collectors often fail to search for unreferenced objects, leading to memory leaks in Python.

Thus, when the unused data is lavished up, and it is forgotten by the programmer to delete it, we can assume that a memory leak exists in python.

With the term Memory Profiling, you don’t need to panic as simple memory profiling is very easy.

Causes of memory leaks in Python

Linger on all large objects that haven’t been released

Reference cycles can also lead to memory leaks in the code.

The underlying libraries can, however, cause leaks of memory at times

How to Fix Memory Leaks

Firstly, with the GC built-in module, we can debug the usage of memory.  All the objects which the Garbage collector knows will be listed. This will allow you to figure out where the entire memory is used.

All the objects, as well as data generated during the implementation phase, will be printed out. However, GC has a limitation in the developed module that it does not specify how objects are allocated.

The built-in module of the new Tracemalloc is the greatest feature of Python as it is known to be better suited to the issue of Python memory leaks. It will help us link an object to the location where it was first assigned.

It enabled us to know the use of module-level memory, figure out which objects are most allocated, and show how the reflector’s memory use changed based on per-iteration.

It also has a stack trace that will help figure out which memory in the program is used by specific use of a common feature. Tracemalloc helps you to keep track of an object’s memory usage.

It will effectively reduce the memory footprints in the program. That’s why Tracemalloc is recognized as a powerful method of memory tracker to reduce Python memory leaks.

At the lowest stage, the allocator of memory ensures enough space in the private heap to store all Python-related data by dealing with the operating system memory manager.

Python is the world’s best language for object-oriented programming. Various large companies use it for their various projects, such as YouTube, Google, etc., and it is recognized for its efficacy.

But even though they are unsourced for a long time, often, such objects are left unresolved. That’s where the Memory leakage occurs in Python.

How to Write a Good Essay for College Admission?