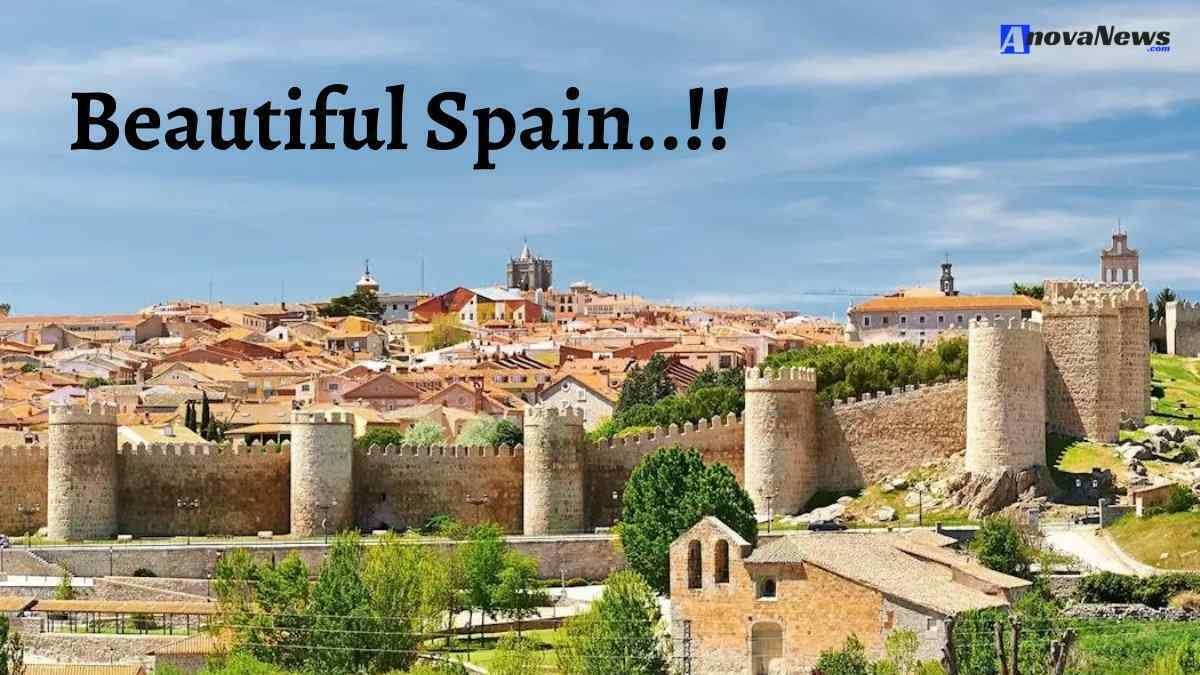 Beautiful Spain: Spain is a destination that never ceases to amaze. Some of Europe’s most stunning cities may be found in Spain. Each of Spain’s provinces and autonomous communities has its own culture and personality.

This is nowhere more evident than in the skylines and back alleys of the country’s major towns. Thanks to its rich history, huge landscapes, magnificent coastlines, and charming villages, the country offers endless outdoor exploration options.

While the restaurants in Barcelona, Madrid, and the Basque Country are among the most popular in Europe, we also find natural beauties and lesser-known architectural accomplishments worth seeing.

These are the gorgeous spots to visit in Beautiful Spain, from the crystalline waters of Los Pilones to the cobblestoned, ancient streets of Cuenca.

It was difficult to reduce this list of beautiful cities in Spain to only 26 because each has its distinct charms, often resulting from centuries of Moorish, Christian, and Jewish influence. This article compiles a list of Beautiful Spain’s urban highlights, each of which deserves a spot on your vacation wish list.

Best And Beautiful Places In Spain To Visit

Siurana is set high in the Prades mountains, overlooking its namesake reservoir, and is one of the most beautiful communities in the country. Climbers come from all over the world to see the stunning cliffs and hiking paths that the area has to offer. Ancient cobblestone lanes wonderfully maintained mediaeval stone buildings, and the Romanesque-style church of Santa Maria make up the town.

The journey to this UNESCO World Heritage Site begins with a little settlement. The Romans created the serrated environment, distinguished by red-clay mountains covered with chestnut trees, by building seven massive aqueducts here to mine gold. They abandoned the place after two centuries, but according to Pliny the Elder, the commander and naturalist, 20,000 Roman pounds of gold were mined from the area every year.

Beautiful Spain can be more attractive with the views of the Alameda across to the Serrana de Ronda mountains. The picturesque city of Ronda is made up of white stone structures clinging to the slopes of a bottomless canyon carved out by the Guadalevn River. Three bridges, built above a 300-foot steep drop, connect the two sides in an astonishing feat of construction. Head to the 18th-century Puente Nuevo, or “new bridge,” traverses the gap below.

One of Europe’s most beautiful wetlands is between the Andalusian provinces of Huelva, Seville, and Cádiz. The seasons modify the natural spectacle, which includes wetlands, lagoons, pine groves, cliffs and unspoilt sandy beaches. Thousands of flamingos travel to the national park in the spring, bringing with them African and Mediterranean bird species.

The National Park of Ordesa y Monte Perdido is a show-stopping Pyrenean stretch of plateaus and deep valleys popular with climbers and hikers. The rocky, arid mountains contrast with the lush, sweeping valleys of trickling streams, meadows, and woodland, as well as deep limestone gorges with rushing rivers and waterfalls. The glacial Ordesa Valley is undoubtedly the most beautiful, with cliffs towering 2,600 feet above the riverbed and Monte Perdido, the Pyrenees’ third highest peak, rising in the distance.

This Galician beach is small and golden at high tide, but as the sea recedes, the water reveals rock formations of vaulted arches—some as high as 90 feet. On windy days, the sounds of the wind whistling thru the large caves are reminiscent of organ music playing in a cathedral. Visit this place in beautiful Spain in October or June to avoid the crowds.

The unusual Casas colgadas, or hanging houses, teetering above the Huécar valley, clinging to the rocks, are set on a limestone spur high above the Jcar and Huécar rivers in Castilla–La Mancha. Built to support the growing mediaeval population, they currently house the Museo de Arte Abstracto Espaol, which features a collection of modern artworks. Explore Cuenca’s steep cobblestone alleyways and mediaeval castle ruins, then take a break at Mirador Barrio del Castillo, a local viewing point with stunning views across the Ro Huécar ravine.

When it comes to lavender fields, most people think of the south of France, but these rows of deep purple can be found in the Guadalajara region, which is less than an hour’s drive from Madrid. The best time to visit this place is in July, when the flowers are at their peak; during the third week of July, bouquets and ribbons line the streets for the town’s annual festival, which includes nightly performances in the fields. Head out at dusk for the greatest photos.

The Caminito del Rey, once one of the world’s most dangerous walkways, has been meticulously rehabilitated in recent years. The exhilaration of wandering along walkways over 300 feet of sheer cliff face persists, even though it is now totally secure. Keep a lookout for Egyptian vultures and golden eagles during the two-and-a-half-hour stroll.

On this easternmost, lunar-like Canary Island, you’re never far from a volcano, but the Montaas del Fuego in Timanfaya National Park is the most stunning grouping. Their stunning black slopes are strewn with reddish-orange and dusty purple elements. At El Diablo restaurant, which provides floor-to-ceiling views of the park, sample foods cooked with heat from the volcano.

Dunes back the beaches here, and the surf is so salty it’s blissfully easy to stay afloat on a long stretch of sand surrounded by a nature reserve. Pine trees and magnificent salt flats can be seen beyond the shore. On a hike to the historic pirate tower, take in the sunset and the sun-bleached rock formations.

Los Pilones, which consists of more than a dozen crystalline, blue-green ponds, was formed by water rushing down from the surrounding Sierra de Tormantos mountains, which resulted in smooth, rounded stones. The surrounding banks are blanketed in white cherry blossoms in the spring, making it an especially attractive time to visit.

The Romans gave the Cés Islands in Galicia the name “Islands of the Gods” because of their turquoise waters and white beaches, an unusual combination in this part of northwest beautiful Spain.

The sweeping Praia das Rodas connects the two main isles (an island or peninsula, especially a small one) and draws the most visitors, but a short walk farther will lead you to the protected, less crowded coves of Praia de Nossa Seora or Praia das Figueiras which makes it beautiful Spain. This is the ideal day-trip location because there are no automobiles or motels.

Spaniards in the know flock to this peaceful fishing community on a lesser-known stretch of the Asturias coast to relax. It’s not surprising, given the setting: a bright-blue ocean lapping a cove, cliffs are strewn with colourful cottages, their window frames looking like crayon sketches, and a pleasantly leisurely pace of life that synchronizes with the tide. From the Cimedevilla overlook, take in this time warp of a town before descending into its maze of little tapas bars for fresh seafood and local cider.

The smallest, westernmost, and least-known of the Canary Islands, it is also the most well-maintained due to its lack of visitors. Its beauty consists of peaks, plateaus, and volcano cones (it has the largest volcanic concentration in the Canaries), as well as plunging canyons, deserts, and lush woodlands.

Beautiful Spain is known worldwide for its wonderful wines, none more so than rioja. Hundreds of vineyards dot the same-named region, many of which provide tours and wine tastings. Logroo, the region’s capital, is an excellent place to start, not only for the wine but also for the must-visit tapas bars.

There are many tourists who used to visit beautiful Spain to spend their holidays. We might have visited the Balearic Islands, Tarragona, Picos de Europa, Costa Brava, Mount Teide, the Cies Islands, and many more places. However, we set out to pare it down to a manageable list, and the result is our list of the best nine Spanish vacation spots.

Related Topics:Beautiful SpainBest And Beautiful Places In Spain To VisitBest places to visit spainTop 16 Best Places To Visit In Amazing Beautiful Spain
Up Next